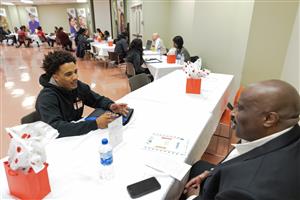 Oftentimes, it’s not what you know, but who you know.“One hundred percent correct,” said Angela Mike, the director of Pittsburgh Public Schools’ Career and Technical Education program.

She said it while in a room with dozens of PPS high school seniors who were having one-on-one networking sessions with local professionals representing everything from ALCOSAN, to PNC Bank, to the City of Pittsburgh, to the Wilkinsburg Community Development Corporation.

And let’s not forget about John Putzier, who was there representing the local Automobile Dealers Association. Putzier was so impressed with one high school senior that he took the student’s resume for an automotive technician and said he’ll pass it on to the many new car dealerships he communicates within the region that are in need of automotive technicians—“desperately,” according to Putzier.

“We are really looking to hire as many people as we can,” he said.

The process lasted for roughly 40 minutes.

Jalen Smith, a senior at Brashear High School, told the Courier he was nervous at first to interact with the professionals, but found out it was “a good opportunity to practice for an interview” and a “good process for getting motivated to find out what your career is, what the future holds for you.”

Rameire Colbert, a senior at University Prep, told the Courier that speaking with the professionals was confirmation as to the many opportunities available to him in the future. He wants a profession in the entertainment technology field.

Aaliyah Artis, a senior at Westinghouse, wants to become a pediatrician. She told the Courier that she was motivated by the professionals who told her the salaries that pediatricians (and nurses, another possible profession for Artis) generate. 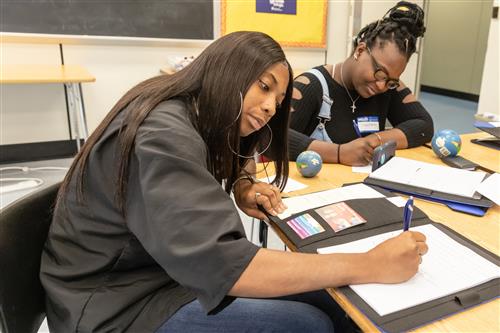